Four bronze tables are located outside the exchange on Corn Street, probably modeled after mobile tables which were taken to trade fairs and markets. Before the Corn Exchange was built in the 18th century, the tables — called nails — were located in the...

The present church is probably the fourth building on this site. It is very close to the original quayside on the Avon, which explains the dedication to St Nicholas, the patron saint of sailors. The crypt of the church, built in about 1400, still remains... 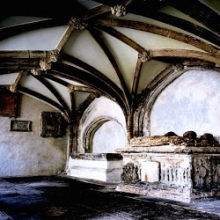 Built into the original fabric of the old city wall on the site of an earlier 12th Century church, this is a Grade I listed unusual two storey church with the tower and steeple over St John's Gate and an 11th Century conduit system. The church is...

Bristol Farmers’ and Producers’ Market is held every Wednesday, (from 7th June 2017) from 8:00am to 2:30pm. in Old City's Corn Street and Wine Street, around the historic four Nails on which Bristolians traditionally sealed their dealings. The award...

Independent exhibition space and home to about 30 artists. Located in one of Bristol’s most ancient hidden lanes.