Situated next to St Nicks market, Bikram yoga is Hatha yoga in a hot room. Consisting of 26 postures and two breathing exercises, in temperatures of around 42-45 degrees centigrade. It is this heat which... 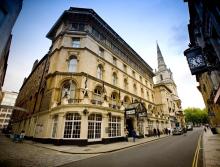 Located on Broad Street in Bristol, the Mercure Bristol Grand Hotel features luxury hotel rooms and suites which combined with room rate discounts and special offers mean fantastic value for money. Each of the182 spacious bedrooms have individually... 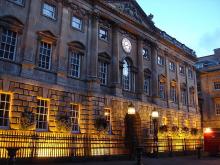 The Exchange is a Grade I listed building built in 1741–43 by John Wood the Elder, on Corn Street, near the junction with Broad Street in Bristol, England. It was previously used as a corn and general trade exchange but is now used as offices and St...

The King Street Brew House is an urban style city centre pub with its very own micro-brewery, creating our own cask and keg beers ‘Socks and Sandals’ ‘Shaft’ ‘White Trash’ ‘Pasty Git’ to name but a few! Complimented with an ever changing array of guest...